I have always felt close to MAS. Maybe it owes to the fact that my father works there since I was born. Or maybe because my home for 10 years is 10 minutes away from KLIA, making me then, literally close to MAS.
My feeling still stands true- I do feel close to MAS. Seeing my dad wearing the uniform with MAS's wau emblem attached is a warm and familiar scene. While on road, as I gaze with awe at planes coming off and to KLIA through my dad's car's window, it always bring me to the fact that I owe so much to MAS.
Yes, I reserve some biases on MAS. Knowing its ridiculously low stock price, with so many controversies ranging from its food to its poor financial performance and now this MH 370, I share the worry and concern. Nevertheless facts remain. MAS is our national pride since 1947. Ranked as the best airlines and one of the safest boast MAS's well-being in spite of its state of being the reluctant punching bag of miseries and ill fortunes.
Putting my biases, and sentiments aside MH 370 has really brought me to a level, that I was unaware of. The night that the news broke to the mass, I was in car, on my way to Philaedelphia. I remember that I checked my phone once in a while, waiting reports from my Dad; retweet any news that came out from newshandlers' tweets, and thought hard: what happenned? I was (and still am) really, deeply concern about MAS. What will happen to MAS after this?
Yet that is somehow not the real question. For every tragedy, in spite of its intricate political or economical implications, there is a human dimension to it. A dimension that we always tend to miss because we are simply not the one directly afflicted by it. 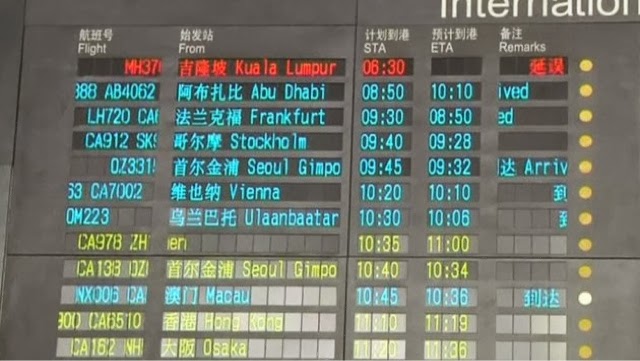 We do not feel as same as those whose loved ones is among 239 unfortunate victims of this very complicated (or should I say, mysterious?) tragedy. This is not something that happens in normal situation nor it is a nightmare. Sadly it is a reality that affects many. Lead by lead, none of them promises a conclusive argument of what really happens. Stories by stories unfold and so far other than indecency and unprofessionalism displayed, none of them really fill the puzzle. The vacum left then is filled with not just professional (by any standard) speculations and theories but also creative and even out-of-the-world ones.
Of course, I do not know much. Then I read. Sometimes it is just painful for me to read the reasons people think is behind this catastrophic tragedy. Especially those of out-of-the-world theories such as "greater demonic hands at play via the meticulous plan of media tycoons" or some " interruptions from the world-beyond simply because they can" or worse, "a political play to defame and distract our nation".
Disclaimer ahead, that I am a muslim and I truly believe in the ghayyibat (realms of the unknown). And due to the nature of name too, I dare not to speculate much; unless some prophetic figures told me so - which I believe no longer exists.
Wait, don't get me wrong. I have no intention to prove or disprove conspiracy theories. Believe me, I was into the stuffs. 52 episodes of The Arrival and 10 more Holy Book episodes - I think I had enough. Personally I am inclined to dismiss this idea because 1) the stuffs and evidences are really hard to prove - not just folding one dollar bill to get a picture of smoking building; 2) I am trained skeptic. Can't blame me since I'm a good scientist by nature (not true either). Ultimately, 3) it doesn't give me the space to actually do something other than sharing the uncertain information, full with conditional will-make-sense-if-you-see-the-relation-which-is-not-coincidental stuffs. I felt restrained, and often these conspiracy theories made me  feel doomed until one messianic figure comes and saves us, once and for all.
I am not totally rejecting this larger scheme of conspiracy theories (sorry for the politically-charged stance) because I really do not know, and my resources at hand is limited. However, at least for MH370, I do believe as for now it is to early to go out with even any true/false convictions and play the blame game.
Remember the human dimension I was talking about? This is a good time to apply it. Empathy is the key here. If your loved ones were to be in among the ones in the flight, would you be satisfied with reasons that you have now for why the unfortunate event? Yes, ask yourself. Will any of you current belief/theory actually consolidate your loss over your loved ones?
Of course, in this crucial moment, full with uncertainty, it is not bad to put up hopes - at least on lead that might explain the situation.
For now, let people do their job for SAR and for those who is not involved (like me) let's pray, hope and have faith. Be good in word and actions which include less speculating, respect the victims and think before you say (or share/RT) anything. As a Muslim I do believe that God is just and fair - everything happens for reason. Sometimes, it might not be the way you think it is, or it may.
For all the families and friends who are involved in this catastrophe, my thoughts and prayers are for you.
For MH 370 and its manifests, I pray that wherever you are, you will be in better places.
Amin. 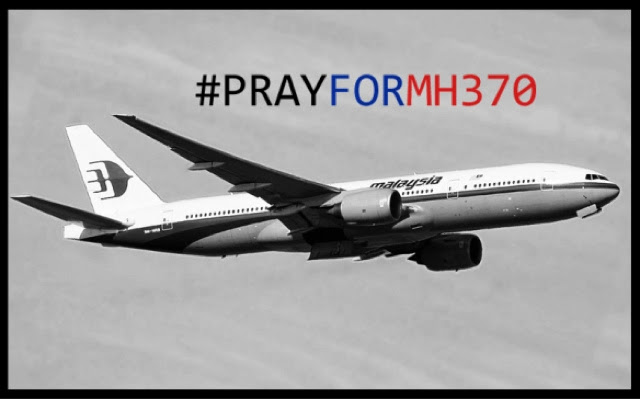 And since I am always rooting for happy ending, I hope and pray, that MH 370 will come back.
Disclaimer: all pictures here are not mine.
Asbab Ilham oleh Unknown at 4:37 PM No comments: